With one race to spare Sjoerd has already taken the crown. With 2 firsts and a second today he outclasssed the competition.
PJ  (3 and 5) and Arno( 4 and 2) did well the last two races as well in the 15-16 knots of breeze.

In the last race Sjoerd did beat Arno by 1 second. In the lighter stuff PJ and Arno were still a bit rusty this early in the season, but once they can do the wildthing they are in the front too. All three of them sailed on a 2013 DNA with the J-boards.

Theo di Batista did sail a good first race, but could not keep up when the wind picked up. Francesco Marcolini scored a win in the second race after Sjoerd missed the mark, and showed his excellence as a sailor.

If PJ beats Marcoloni tomorrow he will be on the podium too. Theo is almost safe for second.

We hope to see  you in Hyeres at the French Nationals the biggest event before the Europeans in Barcelona. 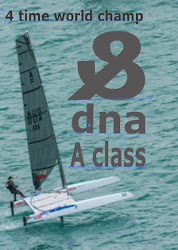